Carb Counting or The Making of a Meal

One of the biggest changes we faced after Eliza’s diagnosis was meal planning. B.D. (before diabetes) we did not eat a tremendous amount of carbohydrates. We were not strict Paleo, but we did strive to eat as close to Paleo as possible.  The carbs we did eat came mainly from fruit, veggies,and some rice. We generally avoided breads, cereals, crackers and all processed food in general.  Unfortunately, Eliza’s insulin to carb ratio requires eating a minimum number of carbs at each meal in order to get insulin. I guess the other option would be to eat very few carbs but then the body turns protein into sugar and…well it is complicated.   Her ratio has changed between 1:60 to 1:50 to 1:40 over the past 5 months  The smallest amount of insulin we can administer with a syringe is a 1/2 unit.  Have you ever seen 20 carbs worth of broccoli? Just to give you an idea, it is an entire bag of frozen broccoli. Getting up to 20 or 40 carbs with just veggies is near impossible. Eliza has an awesome appetite but she is not a Gorilla.  Unfortunately we have added some foods back into her (and Jude’s) diet that we would prefer to avoid. This has been frustrating for me but in the grand scheme of things it isn’t a huge deal. This will be more easy to manage once she is on the pump or as her insulin to carb ration changes.

With her current ration of 1:40 we give her either 20 carbs or 40 carbs at each meal.  It generally works out to 20 at breakfast, 40 at lunch and 20 or 40 at dinner depending on what we are having.  When she is older she will make her own dish and then figure out how many carbs are in the food she plans on eating. For now, we generally make up the kids plates which gives us a lot of control.

Carb counting is especially fun before you have had a cup of coffee.

I weigh and/or measure everything that she eats to get as close to exact as possible when calculating her carbs. Sometimes I know how many carbs I want to give her but need to know how many grams of the food I would need to equal that amount of carbs.

In the picture below I wanted strawberries equaling 8 grams of carbohydrates.  I divided the amount of carbs that I wanted by the carb factor and that told me the exact weight in grams I needed. I knew there was a reason I learned math.

The carb factor for strawberries is .04.  Here I have  8.08 carb worth of strawberries. I know a lot of carb factors by heart now…I am a carb counting machine. 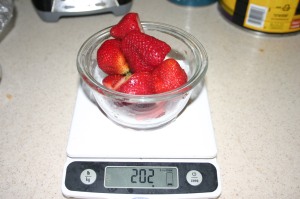 Here is one of my lists of carb factors,. I have two sheets that I use regularly taped to the inside of my cabinets.

These are two of the resources I use when figuring out how many carbs are in a meal.  I prefer carb factors because it is exact and I feel better knowing I am matching insulin to carbohydrates as accurately as possible.

You can also figure out the carb factor for a entire prepared dishes but that is a whole different post. It isn’t something that we have done often but it is possible and helpful if you eat a lot of stews, soups, casseroles etc.

If I never type the word carb again it will be too soon.

Disclaimer: Trying to count carbs in the same room as small hungry children can be hazardous to your health.

How do you figure out carb counts at home?

On Saturday we headed to downtown Charleston for a social event put together by some of our Diabetes team. It gives families living with T1 an opportunity to meet.  We visited the MUSC Urban Farm.  It is a beautiful space nestled on the grounds of MUSC.  It serves as a living classroom where  people can come to learn about locally grown produce. The produce grown on the farm is used by chefs in MUSC cafeterias, donated to local food banks, Ronald McDonald House, Hope Lodge, farm to school projects, church food pantries, and shared with volunteers and participants like us!

We went on a tour of the farm picking produce along the way. The kids filled out a BINGO sheet as they learned about everything on the farm. 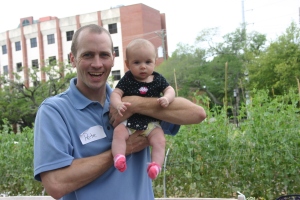 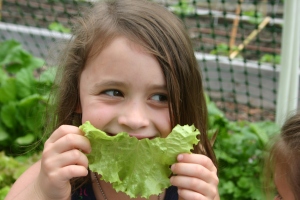 Divvying Up the Bounty 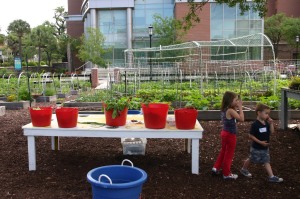 To learn more about MUSC Urban Farm check out http://www.musc.edu/urbanfarm or check them out on Facebook.

When we get there a nurse checks her blood sugar and her blood pressure They get her height and weight. They also check her injection sites. We hand in our meters and go over our log book making adjustments if necessary. At this visit Eliza finds out her A1c which is her average blood glucose for the past 2-3 months. Since Eliza was honeymooning her A1c was below her goal. Now that her numbers are getting all wonky her A1c will not be as low.

We were all excited to talk about getting on the Omnipod and were about to hook her up for a saline trial when the CDE said that her current basal needs are too low for the Omnipod. They are too low by just a smidge. The pod administers insulin in 0.05U increments.  So you really can’t get 1 unit on the Omnipod you would get 1.2 units.  It is close… very close. We looked into doing a 0u  but that isn’t an option on the pod.  Needless to say I left the appointment feeling pretty bummed. After getting suggestions from other parents on the CWD board I think we could make it work.  I am still kicking myself for deciding to wait, but hopefully we can make it happen sooner rather than later.

We are looking at her numbers and possibly making some adjustments. I’ll update on that more when I am not so tired.

I want to thank everyone who donated money and walked with our team Lancets and Lollipops at the Charleston JDRF walk this year. We raised $2,033! We are so blessed to have so many wonderful people in our lives.

I also want to thank my husband for putting this video together. He did such an amazing job.  He had better put his thinking cap on for next year.

Is the Honeymoon Over?

Last week was probably the hardest week for me since diagnosis. Eliza started showing signs of a mild cold on Friday. On Saturday her blood glucose levels started to go up. We have been very lucky that since December we have dealt with very few high numbers. This is because Eliza was/is in what is considered a honeymoon period. Unfortunately this honeymoon does not involve too many margaritas and me passing out on a lounge chair at a resort in Mexico. This honeymoon period sometimes follows the diagnosis of Type 1. It is a time when the beta cells in the Pancreas that have not been destroyed still kick out insulin. Not everyone experiences a honeymoon and it often varies in length. During this time you generally experience more lows than highs due to the unpredictable amount of insulin being kicked out by the pancreas. Sounds fun, right? Anyhow, I wasn’t sure if the high numbers were from the honeymoon ending, the sickness, a growth spurt, or just Diabetes being unpredictable. So, we waited to see if the numbers would start to come down. Unfortunately, they did not come down and we continued to see high numbers over the entire week. We changed her ratios twice and by Friday of last week we started seeing some better numbers.

It is hard not to tie your emotions to the number you see on the meter. It is even harder knowing that when your child is experiencing high blood sugar it is causing long term damage to her body. While low blood sugar is scary now, high blood sugars are what hurt in the long run.  While Eliza seemed to be feeling fine, I was feeling guilty that I couldn’t get her numbers in range even though I was doing everything right.

So it was a rough week for me. I spent a lot of time feeling frustrated, tired and sad about Diabetes, Thankfully, I have a lot of amazing support and am now feeling much better. I a not sure if the honeymoon is over or the near the end. We will continue to take it one reading at a time…. 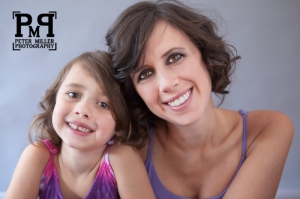 This is my sweet Eliza. My husband Peter took this picture of us three short months before Eliza was diagnosed with Type 1 Diabetes.  Three months before a blood test result on Christmas Eve changed our lives forever.  I am going to document her journey here on this blog for myself,  friends & family and especially for Eliza.